Despite the incidence of life-threatening illness in children reducing, health-seeking behaviour and demand on secondary care services, such as Paediatric Assessment Units (PAU’s) has increased. Re-presentations via temporary open access represent a significant proportion of the workload and may be avoidable with improved safety netting processes.

The scoping project was conducted in all Health Education England (Wessex) hospitals containing a PAU followed by change in the base hospital (Southampton Children’s Hospital).

This project aimed to identify the scale of unnecessary re-presentations, identify areas for improving the safety netting process and implement changes to address this.

Scoping work was performed at the 8 hospitals hosting a PAU. Logistical information was collected regarding facilities, procedures for open access, re-presentation rate and length of stay was performed.

Whilst open access procedures were fairly uniform in the region, re-presentation rates varied significantly from 4.4% to 20.1% (mean 11.8%). 55% of these children were discharged again within 4 hours, agreed by consensus opinion to indicate an unnecessary re-presentation. Purpose-designed questionnaires were utilised to seek the view on safety netting from 3 different groups:

Despite 95% of HCPs feeling written information leaflets should supplement a face-to-face explanation, 83% of those returning via open access had not been given one.

To visit PAU’s across the Wessex region to identify the proportion of children returning via temporary open access and scope views from HCP’s and parents on potential areas for improvement.

To reduce unnecessary re-attendances via temporary open access to PAU whilst ensuring those who re-present do so in a timely manner measured over a 6 month period.

The primary outcome measured was proportion of children seen on PAU returning via temporary open access.

Baseline data analysed using the Anderson-Darling test ensured normal distribution. Results were plotted on a Run Chart with the median calculated prior to instigating change. Following run chart rules, once a step change was indicated, a new mean was calculated and plotted onto an individual moving range chart, a form of Shewhart chart.

Parents, carers and young people were engaged throughout the process as well as the healthcare professional’s integral to the safety netting process. The direction of the project and all changes were dictated directly by feedback from these groups.

Results of the scoping work were presented to the base centre and ideas were brainstormed to improve the safety netting process. The main problematic areas were highlighted as access, availability and awareness of the written information leaflets. To address this, through a series of Plan-Do-Study-Act cycles, a hyper-linked document of all available safety netting resources was introduced in the pilot centre. This was uploaded on to every computer on PAU and widely advertised amongst child health through emails, posters and verbally.

The hyper-linked safety netting document was introduced over a 3-week period with a series of feedback driven PDSA cycles to augment the user experience. Data was continually collected from October 2016 to July 2017. Results were regularly relayed to all PAU staff and presented graphically on a run chart advertised further by informal champions.

The proportion of children seen on PAU via temporary open access reduced significantly from a mean of 11.5% to 4.2% following intervention. 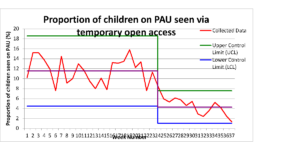 There was no significant change in the documentation or proportion of children discharged again within 4 hours.

As a balancing measure, children with delayed necessary re-presentations were recorded – none were identified.

Reducing the number of children re-presenting via open access released time for staff to concentrate on the children who did need to be there. By augmenting the safety netting process, parents were more empowered to manage their children at home.

Further work is required to improve on documentation within discharge summaries and prototypes of auto-populating shortcut codes are in development with IT departments.

A regional resource, Wessex CHILD (Child Health Information & Leaflet Directory), has been developed and advertised for increased use transcending primary, secondary and tertiary care. Ongoing advertisement and engagement with the regional PIER network is fundamental to ensure that the latest resources are sign-posted and redundant links are removed.