A multi-site project to improve East of England Network's rate of babies born at less than 27 weeks gestation in a maternity unit with a NICU on site, in line with the national average.

The NNAP report based on 2017 data was released in September 2018. The data showed a comparison with all neonatal networks for this measure. East of England (EOE) was shown to be the worst performing network in the audit. EOE achieved 46.4%, with the national average of 73.9% and the highest performing networks at 89.9% (Figure 1).

Figure 1: Rates of compliance for birth in a centre with a NICU: neonatal networks (2017). 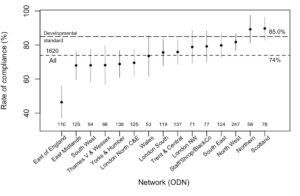 As an ODN team and network we were shocked at this information and started to look at reasons for why this was happening. On closer review of our data we identified one trust where there were a larger number of babies who were born and transferred ex-utero. It was highlighted at their local maternity systems (LMS) board that they were an outlier and the impact this has on outcomes for these babies and families was emphasised.

The maternity team from this trust then agreed to undertake a thematic review of all cases over the previous two years. This was escalated to executive level within the trust and all members of the midwifery and obstetric teams were informed. The thematic review concluded that one third of the women could potentially have been transferred to a tertiary centre for delivery.

Improve the East of England Network’s rate of babies born at less than 27 weeks gestation in a maternity unit with a NICU on site, in line with the national average.

This data was shared with all LMS groups, at local learning systems (LLS) meetings, and discussed with the neonatal teams at all governance meetings. This brought together all groups of staff who could impact this process.

As a network we have set up a right place of birth project group. With the support of the LLS teams, we are looking at all aspects of the process. This includes predicting preterm birth, ensuring that we move the right patients, and optimising management of women in preterm labour (including magnesium sulphate and antenatal steroid administration).

As a neonatal network, we are also looking at repatriations from NICU, to ensure there is capacity to keep mothers and babies who are booked in the EOE within the network for care where appropriate.

The chart below (Figure 2) shows a huge improvement for EOE, with a compliance rate above 60% for 2018 data, with the improvement project only starting in September 2018.

Figure 2: Rates of compliance for birth in a centre with a NICU: neonatal networks (2018). 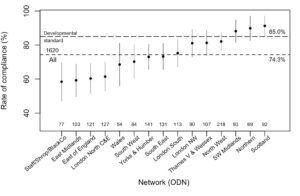 There is still work to do to continue to improve this. The network reviews this data regularly, it forms part of the ODN dashboard and exception reporting is now starting to become standard practice.

Our LLS colleagues have supported this change and all of our LLS teams within tertiary centres are involved in the project to look at right place of birth to ensure we continue to improve. This has been a true multidisciplinary team approach to improvement.

Our aim is to be above 80% within the next 12 months. Our data is complicated by some pathways which go outside of the region, specifically for this group of infants. Having the NNAP report focussed our attention as a network, on things that were a significant issue, allowing us to focus efforts to implement change.

Submit a project or ePoster
Neurotic About Notes: A Quality Improvement Project to Improve Note Safety