Establishing a monthly multi-disciplinary analysis of all paediatric cases transferred from the paediatric emergency department and paediatric ward to PICU.

Learning from these PICU transfers would help local hospitals identify areas for improvement to enhance patient safety and clinical care.

Local hospital paediatricians often rely on updates from their retrieval service for information about their patients transferred to PICU.

Prior to this project various members of the paediatric team would contact PICU for updates of children transferred out from the ward and Paediatric emergency department and in many cases the learning was not shared more widely.  There was no systematic process to identify areas for improvement or share learning from these cases (unless they were classified as a serious untoward incident) and little opportunity to discuss this with the anaesthetic/wider multi-disciplinary team.

The project aim was to establish a monthly multi-disciplinary analysis of all the Paediatric cases transferred from the Paediatric Emergency Department and the Paediatric ward to identify areas of clinical learning and patient safety improvement.

The project team members met with key medical and nursing stakeholders from Paediatrics, Emergency and Anaesthetic departments and the hospital outreach resuscitation team to discuss the aim of the project; review the tool used; and identify individuals from each department who the team invited to form a new multi-disciplinary team for monthly case review.

In November 2016 a new incident log was implemented to collect data on PICU transfers from the Paediatric Emergency Department and Paediatric ward of one district general hospital.

Between January and September 2017, the multi-disciplinary team met monthly to review the Electronic Document and Records Management (EDRM) system of all patients transferred to PICU in the previous month(s). Each monthly meeting was a PDSA – team members were invited to feedback on the process and any agreed changes were tested at the next monthly meeting.

EDRM was reviewed using an adapted RECALL (Rapid Evaluation Cardiorespiratory Arrest with Lessons for Learning) tool.  The RECALL tool provided a structured template for retrospective case note review of patient management, including monitoring, escalation and medical reviews, in addition to staffing issues, debriefs and parental feedback. This built on the 2015 S.A.F.E. project which used RECALL to improve the care of deteriorating patients on a Paediatric ward. At the end of each meeting the team were invited to review the usefulness of this tool and any suggested changes were tested the following month.

Areas of improvement and excellence from the case note review were agreed by the multi-disciplinary team. Learning points and recommended actions for clinical practice and patient safety were then shared across services by monthly newsletters and updates given at teaching sessions and departmental risk meetings. 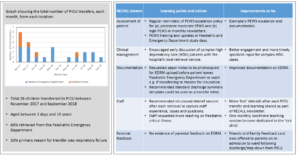 This improvement was sustained by the trainee lead position becoming an established role within the Paediatric trainee team. This role was passed on to another trainee at the end of each 6 month Paediatric rotation. This role was recognised and valued as an important leadership and management opportunity for the trainee by the consultant body. This meant there was always a trainee within the MDT team, providing continuity for the pre-meeting preparation and an ‘on the ground’ champion for change.

Shared learning from regular structured multidisciplinary case note reviews of PICU transfers resulted in improvements in the clinical assessment and management of children presenting with critical illness, documentation and written communication, and training and education for staff.

The main challenge was finding regular time to bring together medical and nursing staff from different departments. Once the MDT membership became stable it became easier to agree a fixed monthly meeting and invites could be sent in advance several months at a time.

Involving the Paediatric nursing lead in the emergency department was an important key to success. Her engagement resulted in the nurses contributing to an incident log and database of transfers. The other key to success was having a Paediatric trainee lead for the project. This trainee was responsible for preparing the notes for each meeting and sharing the learning with other trainees. The trainee became the ‘on the ground’ champion for the project, leading by example, supporting change in systems and clinical practice and implementing changes in areas such as documentation.  This was key for change to become sustained – and so a successful project.

As the monthly RECALL meetings have become well established and the various teams understand the benefit, it has been possible to include other members of the anaesthetic and emergency department teams including trainees to spread the learning. Further ideas have included multidisciplinary team simulations of cases discussed at these meetings. Also latent errors in the system have been highlighted and escalated, such as the availability of paediatric chest drains.