Raising awareness of the risk factors linked to NEC to decrease the incidence of NEC on our neonatal unit.

Necrotising enterocolitis (NEC) is a neonatal emergency mainly seen in preterm infants. It can have devastating consequences including delayed feeding, surgery, short gut, poor growth, increased hospital stays, delayed neurodevelopment and death. In the UK, 1 in 20 preterm infants born at less than 32 weeks gestation are at risk of NEC with high mortality rates of more than 20%.

In 2017, the neonatal unit at Watford General Hospital stood out as having a high rate of NEC compared to units of the same level, our network and nationally (Table 1).

The study aim was to understand the risk factors linked to NEC and decrease the incidence of NEC at our unit by 50% within one year using structured quality improvement (QI) methodology.

All key stakeholders were engaged (including parents) in the discussions. In particular, we would like to acknowledge Bhavani Sivakumar, Neonatal Data Administrator and the neonatal team, external reviewers, parents and families for their participation and engagement in this collaborative quality improvement initiative. 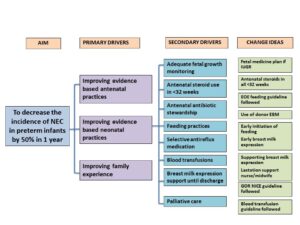 Scale-up and spread findings to the wider neonatal community.