The investigation and management of well infants at increased risk of Early Onset Neonatal Sepsis (EONS) remains challenging. True EONS is uncommon but the potential impact of sepsis can be disastrous. As a result, treatment rates far exceed the actual incidence of EONS and many infants receive antibiotics that are ultimately not necessary. Rising resistance and long-term health implications due to empirical antibiotic use are major concerns. Infants and their mothers also have longer hospital admissions and may be separated.

Many risk assessment tools for EONS in well babies on postnatal wards are based on categorical risk factor tools. These are often based on NICE guidelines and introduced without a strong evidence base nor prospective assessment. Babies are treated for sepsis in the presence of any “red flag” risk factor or multiple other risk factors and clinical condition is not taken into account.

Following a retrospective projection in our centre, we incorporated the Kaiser Permanente Sepsis Risk Calculator (KP-SRC) into a new guideline to aid in decision-making for babies on postnatal wards with EONS risk factors.  This multivariate tool was initially developed using a very large retrospective cohort in the United States (608000 infants) then implemented prospectively (204685 infants), resulting in substantial reduction in antibiotic administration (48%) without evidence of adverse events. A retrospective study in Wales demonstrated similar findings. This tool calculates an infant-specific risk based on both intra-partum risk factors and the infant’s clinical condition. 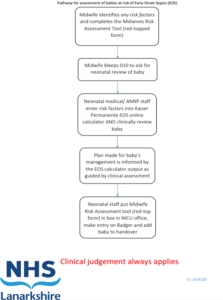 140 infants who were assessed and managed as per a new trial guideline incorporating KP-SRC over 3 months. We demonstrated a 49% reduction in empirical IV antibiotic use.

One blood culture and one CSF culture were positive for suspected contaminants only. There were no other positive cultures and no infant was readmitted to hospital with sepsis or meningitis, including up to 72 hours after discharge. ​

16 babies avoided empirical IV antibiotics in a 3 month period. Extrapolating our results, we propose that around 64 infants, at relatively low risk of EONS, per year might avoid unnecessary antibiotics, whilst still undergoing clinical assessment and a period of observation. If each of these infants required 2 antibiotic days, 2 hours of medical staff time, 4 hours total nursing time for IV antibiotic administration and 6 hours of maternal separation then we propose that we could save approximately 128 antibiotic days (with an associated reduction in duration of hospital stay), 128 hours of nursing staff time, 512 hours of nursing staff time and 768 hours of maternal separation.

Ongoing audit of adherence to our new guideline. We will aim to have consistently reduced rates of antibiotic use and undertake a formal study of changes in maternal-infant separation following full introduction of this guideline. The development of a straightforward guideline, including a flowchart for implementation of the KP-SRC tool, will ensure the guideline can continue to be implemented by future rotations of junior medical staff.

Robust discussion of the rationale and evidence base for using a sepsis risk calculator should be presented to midwifery, nursing and medical staff before its implementation. Good understanding of how to use the calculator is essential for its safe and effective use. There is no substitute for good clinical judgement and this should be observed at all times.

We feel there is scope to utilise the KP-SRC in other units. We have incorporated the calculator into an adapted local guideline to ensure that it can be utilised effectively and safely in our centre, and would suggest that the KP-SRC can be implemented in a way that fits with local dynamics.